Consolidation without a loan
Debt Management Plans
Learn about the nonprofit debt relief option that can help save time and money on your credit card debts.
END_OF_DOCUMENT_TOKEN_TO_BE_REPLACED

Featured Service
Foreclosure Counseling
Housing concerns are on the rise. If you need help, our HUD-certified counselors are here for you.
END_OF_DOCUMENT_TOKEN_TO_BE_REPLACED

Featured Blog Post
What Beginners Should Know About Credit Cards
Used mindfully, credit cards open up all types of convenient doors, but if used unwisely, they can also dig you into a financial hole.
END_OF_DOCUMENT_TOKEN_TO_BE_REPLACED

"A huge weight off our shoulders."

Jeff, a manager for a graphics firm, ran up $90,000 in credit card debt from flipping houses, going back to school, starting a family, and other expenses along the way. But he knew who to trust when he needed a partner in his goal to make good on his debt.

Before getting married, Jeff bought and sold historic homes in need of repair. When it came time to settle down and start a family, Jeff wanted to leave the constant chaos of living in a construction zone. He moved to a better neighborhood and purchased a brand new house.

“The home was at the very peak of what my wife and I could afford, maybe even beyond,” he says with a tone of regret.

Upon settling into married life and having a son, Jeff decided to return to school to pursue a degree. This new commitment to his education meant the family income was temporarily reduced and new debt was being added. To compensate for the shortage, Jeff relied on his student loans and the couple’s credit cards to supplement their income.

The expense of a new house, a child, two new cars, and ever-increasing debt payments began to take a toll. The Great Recession hit while Jeff was still in school, and his personal financial crisis came to a climax. The old habit of rolling credit card balances from one 0% promotional rate to the next came to an end as banks tightened their belts and the cost of credit skyrocketed.

Despite being organized and fiercely independent, Jeff realized he was probably going to need help. He renewed his efforts to repay the debt on his own, but with 20 different accounts at various high interest rates it was nearly impossible. To make matters worse, he found himself faced with a $4,000 debt to the IRS.

Years earlier, Jeff had close friends who were clients of MMI. He had witnessed first-hand how counseling had helped them restore a life of financial stability, so he had high confidence that MMI could help him too. His confidence was affirmed by MMI’s status as an industry leader, and he liked that there were local branches and 24/7 availability by phone and online. “MMI really helped us change our lifestyle and find where we could trim down,” he said.

“We got rid of a lot of unnecessary expenses like going out to eat”.

Jeff admitted some initial trepidation about the long-term nature of a debt management plan (DMP) when it was recommended to him, but his concern was quickly abated when he saw the huge interest rate reductions begin to show up on his accounts. “I liked the peace of mind that the structure of the program offered me. It was also great to have the flexibility of adding an additional creditor to the DMP after a 0% promotional rate expired.”

A self-described individualist and do-it-yourselfer, Jeff wanted to avoid bankruptcy at all cost. “Just because I can file bankruptcy doesn’t mean I should,” he said. “I also didn’t want to damage our credit. Even though we were in a financial hole we didn’t miss payments, so our credit was decent.”

Graduated, but not finished

Even though Jeff has graduated from both college and his DMP, he’s still working towards his goals. He says his next challenge is to finish repaying his student loan debt and a couple of smaller debts that were handled outside of his DMP.

“Completing the DMP was a huge weight off our shoulders,” he says. “We’ve made enough progress that we can handle the rest on our own and it’s a big relief to have some wiggle room back in our budget.” Jeff stuck to a strict repayment schedule and was able to finish his DMP two months early. Since then, he’s refinanced his home for a better rate and made some home improvements.

Jeff’s advice is to be proactive and remain committed to the process. “Don’t try to ‘set it and forget it,’” he says about handling personal finances.

“Set a budget and monitor it regularly. Use the technology at your disposal like online banking and smartphone apps to keep you on track.”

Jeff also hopes to impart the important financial lessons he’s learned to his son as he gets older. “I believe credit is a necessary evil. Life is cyclical, especially when your income is based on business volume. Credit allows me to get through times when expenses are higher than income, but I have to dedicate myself to paying it off when there’s surplus.”

Jeff is a real client. His success is a result of his hard work. Similar success is not guaranteed. 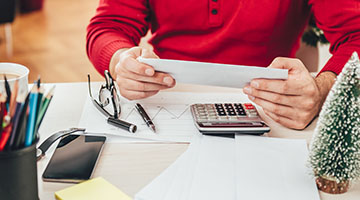 We'd love to feature your story. Click below to connect with us via email.

END_OF_DOCUMENT_TOKEN_TO_BE_REPLACED

Helping consumers overcome their financial challenges is our top priority. We love sharing your success!
END_OF_DOCUMENT_TOKEN_TO_BE_REPLACED