Consolidation without a loan
Debt Management Plans
Learn about the nonprofit debt relief option that can help save time and money on your credit card debts.
END_OF_DOCUMENT_TOKEN_TO_BE_REPLACED

Featured Service
Foreclosure Counseling
Housing concerns are on the rise. If you need help, our HUD-certified counselors are here for you.
END_OF_DOCUMENT_TOKEN_TO_BE_REPLACED

Featured Blog Post
What Beginners Should Know About Credit Cards
Used mindfully, credit cards open up all types of convenient doors, but if used unwisely, they can also dig you into a financial hole.
END_OF_DOCUMENT_TOKEN_TO_BE_REPLACED

by Louis DeNicola on in Budgeting and Building Savings 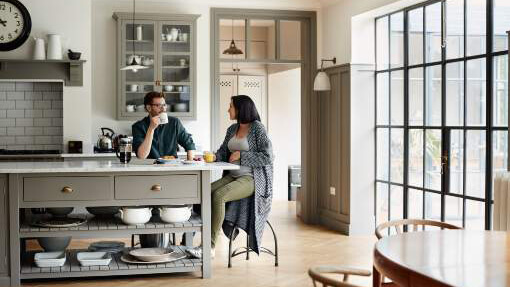 Over the last several years, the FIRE movement has spread from a small ember to a roaring blaze. It’s mainstream enough for many people to have heard of the term, which stands for financial independence, retire early, even if they haven’t bought into the idea.

In brief, cutting your expenses and investing as much money as possible (in the stock market, bonds, and income-producing assets like real estate) can allow you to stop working much earlier in your life.

“My journey into the FIRE rabbit hole started with just a couple of blogs and devouring as much information as I could,” says Lisa. Like many in the community, she prefers to keep her last name private as she details her journey and family’s finance on her blog, Mad Money Monster.

For some who choose the FIRE path, the process allowed them to stop working in their 30s. Others continue to work, but recognize and enjoy the fact that they could stop working if they wanted.

The basic rules of FIRE

The details can vary depending on who you ask — and sometimes heated debates can arise over these details — but here are a few key definitions and principles:

The trade-off — spend now or save for later

With the basics in mind, you might already see where the challenges and debates could arise. Figuring out how to decrease expenses, increase income, and where to invest can all be major, life-changing decisions.

For some, extreme frugality becomes a mark of honor as they ditch their car for a bike, move to a low-cost-of-living area, and start practicing no-spend weeks. Others find a middle-ground to increase their savings without making such intense changes to their lifestyle.

“My family and I were all aboard the FIRE train,” says Lisa. “But after a couple of years of blogging about early retirement and experiencing extreme frugality fatigue, we decided that the sacrifice to our current lifestyle wasn’t worth the return.”

In part, Lisa says she came to this decision because she saw how many people who say they’re early retirees continue to work on a blog, podcast, or in another non-traditional job. Lisa also realized both she and her husband like their full-time jobs, and she wants to maintain the certainty of a steady income to support her family.

Lisa says another factor may be that she is a little older than the stereotypical FIRE crowd and has faced the financial realities that can derail early retirement plans, such as caring for parents. “If you asked me in my 20s if I was prepared to subsidize my mother’s health care, dental expenses, and groceries I would’ve scoffed,” says Lisa. “Today, it’s a reality.”

Lisa and her family are still working toward financial independence and continue to look for ways to save money and increase their investments. They’ve simply found a less extreme approach that works better for them.

The principle can benefit anyone

Many older Americans continue to work (either out of enjoyment or necessity) into their later years and FIRE might not be a realistic goal. However, you could still benefit from learning about and incorporating some of the core principles into your life.

“Even if FIRE isn’t in the cards for someone, the basic concept of living well below your means, staying out of debt, and saving as much as possible for the future are wonderful additions to anyone’s lifestyle,” says Lisa. “Just remember to also enjoy the moment.”

These same principles can also help you achieve common personal finance goals, such as building an emergency fund and saving for retirement (even if it’s not one that’s “early”).

Want to dive in?

If the thought of reaching FI and retiring early sounds intriguing, it’s worth spending a little more time learning about the FIRE movement and community. Here are a few places where you could start:

You may be surprised to find that others with similar life experiences and situations are on a path toward FIRE. At the very least, you could come away with some interesting tips for saving money, increasing your income, and making wise investment decisions.

And if reducing unsecured debt is part of your path toward financial independence, be sure to take advantage of MMI’s free debt and budget counseling, available 24/7.

Make the most of every dollar and start building toward your dreams! Budget counseling is FREE and available 24/7.
END_OF_DOCUMENT_TOKEN_TO_BE_REPLACED