Consolidation without a loan
Debt Management Plans
Learn about the nonprofit debt relief option that can help save time and money on your credit card debts.
END_OF_DOCUMENT_TOKEN_TO_BE_REPLACED

Featured Service
Foreclosure Counseling
Housing concerns are on the rise. If you need help, our HUD-certified counselors are here for you.
END_OF_DOCUMENT_TOKEN_TO_BE_REPLACED

Featured Blog Post
What Beginners Should Know About Credit Cards
Used mindfully, credit cards open up all types of convenient doors, but if used unwisely, they can also dig you into a financial hole.
END_OF_DOCUMENT_TOKEN_TO_BE_REPLACED

Diana, a Columbian immigrant, had experienced many issues with her personal finances. She couldn’t maintain the payments on a timeshare she had bought and never used, she had late payments on maxed-out credit cards, and her budget was non-existent. She struggled with money even though she made good income as a chef at an upscale yacht club in Miami. She tried to focus on catching up on her bills, but was never sure where her money was going every month.

A single parent, Diana’s financial goal was to buy a home for her and her young son. She knew having savings and a healthy credit score would be important. She tried working with a “credit repair” company that promoted its services through a Spanish-language radio station in South Florida, but nothing improved, even after she paid their high fees.

In 2016, Diana was referred by a friend to the Hispanic Center for Financial Excellence (HCFE), a program of Money Management International (MMI). After receiving help organizing her budget, she found that most of her discretionary income was going towards paying the credit repair company, keeping up an expensive lifestyle, and sending money back to her mother in Colombia.

A Community at Risk

“Our Hispanic community is often taken advantage of, so they need a safe place to come and know that they will receive unbiased, free financial advice with no strings attached,” said Emanuel Rivero, Director of the Hispanic Centers at MMI. “Hispanics are resilient, hard-working people. The community is incredibly goal-oriented, but they need to be aware of the nuances and pitfalls of the U.S. financial system in order to realize their dreams.”

Learning to create a budget and cut back on family expenses was not an easy task for Diana. She felt especially guilty at the thought of reducing her mother’s stipend. It took nearly a year for her to accept that the $600 dollars she sent to her mom every month was causing much of her financial stress. She came to realize that in order to accomplish her own goals she would have to reduce her spending and redirect that money to her savings.

After two years in the HCFE program, honing her budget and closely monitoring her credit, Diana had greatly increased her financial confidence and improved her credit score from the low 500s to 820. Diana focused on saving $9,000 for a down payment and closing costs on a house. By saving her tax refund, she is now very close to reaching her goal and buying her new home.

“Before I came to the center I felt like I was in quicksand; wasting my time and energy getting nowhere with my finances,” says Diana. “I am grateful because this program has helped me improve my own credit score, and here in the U.S. good credit is as important as having cash.”

While the HCFE currently focuses on clients in metro Miami and Atlanta, MMI inspires consumers across the country to achieve financial confidence through empowered choices.

Diana’s success is a result of her personal dedication and hard work. Similar results are not guaranteed. HCFE and MMI are not credit repair services. HCFE services are provided free of charge through the generous support of the SunTrust Foundation. 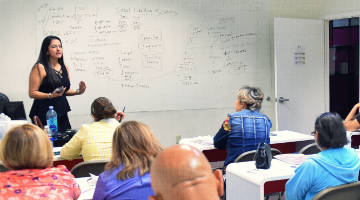