Consolidation without a loan
Debt Management Plans
Learn about the nonprofit debt relief option that can help save time and money on your credit card debts.
END_OF_DOCUMENT_TOKEN_TO_BE_REPLACED

Featured Service
Foreclosure Counseling
Housing concerns are on the rise. If you need help, our HUD-certified counselors are here for you.
END_OF_DOCUMENT_TOKEN_TO_BE_REPLACED

Featured Blog Post
What Beginners Should Know About Credit Cards
Used mindfully, credit cards open up all types of convenient doors, but if used unwisely, they can also dig you into a financial hole.
END_OF_DOCUMENT_TOKEN_TO_BE_REPLACED

by Jackie Lam on in Personal Finance 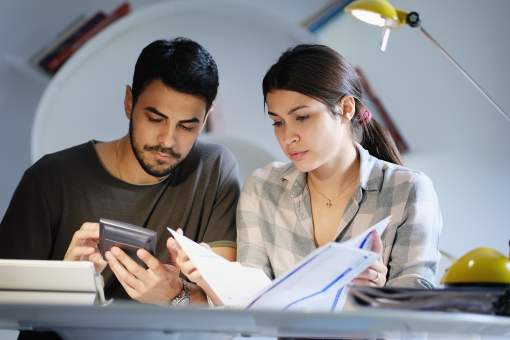 The following is presented for informational purposes only.

Every individual has their own unique relationship with money. We carry certain beliefs, habits, and values that guide our decision-making process. Those beliefs and habits are usually passed down through families, communities, and cultures.

When we take a wider, more scientific look at these habits, we can usually start to spot trends, and these trends can tell us some crucial things about how larger groups of people interact with money.

A recent study conducted by Elevate’s Center for the New Middle Class reveals some crucial facts about how the American Hispanic population interacts with money and personal finance. The largest minority in America, Hispanics make up 17 percent of the population.

Participants of the study were segmented into two groups: those with prime (or very good) credit, and those non-prime credit (in other words, with a credit score below 700 on the FICO scoring model). The study included Hispanic and non-Hispanic participants, who were all asked a series of question about personal finance and how they managed money.

We’ll take a closer look at what the study found, focusing on how non-prime Hispanics stack up against the non-prime population as a whole. Plus, we’ll offer a few tips on how Hispanics can use this info to bolster their financial situation.

So, what are the most notable financial trends among Hispanic consumers, prime and non-prime, when compared to their non-Hispanic counterparts?

When compared against their non-prime counterparts, non-prime Hispanics enjoy greater income stability, and higher levels of employment. What’s more, they have less difficulty predicting month-to-month fluctuations in their income, and therefore have an easier time planning for bills and upcoming expenses.

Because they’re solid planners, they experience less stress than other non-prime consumers. They exhibit greater confidence that they can cover an unexpected expense, and are better about saving regularly.

What’s interesting is that Hispanics, no matter where they fall on the credit spectrum, are far more likely than non-Hispanics to have experienced a change in their employment situation in the last 12 months. They are able to weather these changes well, however, and maintain their financial stability.

They Spend More on Stuff, Less on Experiences

So how are Hispanics spending their hard-earned cash? When compared to the general population, they’re more likely to spend in appliances, gadgets, furniture, and entertainment. On the flipside, they’re less likely to shell out funds on vacations, life insurance, and routine medical expenses.

Hispanics as a whole are no stranger to fintech tools. Those of the non-prime set are more inclined to use mobile banking apps, make payments with their smartphones, and share money electronically. While they’re greater adopters of technology, they’re less likely to carry a checkbook, but more inclined to visit a brick-and-mortar bank location.

They Borrow in Different Ways

While non-prime Hispanics have similar mortgage rates than the rest of the population, the likelihood they have a personal or auto loan increases. However, they’re less likely to have a general purpose credit card. A third of Hispanics with prime credit feel as if spending with a credit card could lead them into trouble.

More Financially Integrated With Their Families

Hispanic families are more financially meshed than the general American population. They’re twice as likely to regularly give money to their kids or grandkids. What’s more, they’re more likely to ask for help in managing their money from their parents. “That integration does provide more financial and structural support,” says Jonathan Walker, executive director of Elevate. “When you’re hyperfocused on being self-sufficient, you are more vulnerable.”

Greater Optimism About Their Finances

Among those surveyed, nearly half of non-prime Hispanics were highly satisfied with their current financial situation. And because they’re on top of their money management, they feel a far greater sense of financial stability than the non-prime population as a whole.

The entrepreneurial spark is also strong among Hispanics. No matter their credit situation, Hispanic consumers are more likely to be in the process of starting a new business within the next two years, as compared to the general population.

“This shows how alive and well the American dream is among Hispanics,” says Walker. “That sense of entrepreneurism, and willingness in trying their hand in running their own business, shows a greater optimism about their financial future.”

Areas of Improvement for Hispanic consumers

Based on these findings, here are a few of the top things Hispanics can do to improve their money situation:

For day to day transactions, Hispanics lean more heavily on cash and pre-paid cards, and less heavily on credit cards, as compared to all other consumers. There can be a lot of valid reasons to skip out on using credit cards, but the truth is that credit - when used wisely and in proper moderation - is often a safer choice for most of your spending needs. Couple this with the unique financial perks of many credit card programs and the credit reporting benefits of using credit smartly, and you can see why becoming comfortable with credit can help improve your overall financial outlook.

The reasons are unclear as to why Hispanics as a whole are less likely to have a retirement fund in place. It could be because they simply don’t have that benefit available available to them through the workplace. “They are so good at financial planning it seems a bit strange, and could be a structural thing,” suggests Walker.

If that’s the case, they’ll need to take matters in their own hands, and seek out ways to invest regularly into a retirement fund. If they’re self-employed or own their own business, options to save for retirement include opening a solo 401(k), SEP IRA, Simple IRA, or an IRA. If they are an employee of a company, they can open a Roth or Traditional IRA on their own. Each of these have different annual contribution limits and eligibility rules, so you’ll want to review your options to see which is a best fit for your needs.

Insurance can be an unpleasant thing to think about. First off, something bad has to happen before you can receive a payout. But it’s important to have insurance to protect your family should the worst happen.

“It would be a tragedy to lose one of the breadwinners in the house,” explains Walker. Factors that could affect your life insurance premiums include your age, gender, family health history, occupation, if you’re a smoker, and the policy you’re choosing.

Go to the doctor more regularly

When it comes to your money, not taking care of your health could prove costly. “If you delay routine medical care for too long, you end up with much more costly expenses down the road,” says Walker. That’s more time off from work, higher medical bills, and in turn less money to save for the long-term.

What’s more, your greatest asset isn’t locked into your home or investments in the stock market. It’s your ability to work. As Hispanics aren’t as likely to spend on routine medical expenses, it would be beneficial for them to take care of themselves. A routine checkup and lab work could detect disease or a chronic condition before it has debilitating effects.

If you’d like some help with your credit situation or finances as a whole, reach out to an accredited credit counselor at Money Management International (MMI). We’re here to provide advice and resources.

Make the most of every dollar and start building toward your dreams! Budget counseling is FREE and available 24/7.
END_OF_DOCUMENT_TOKEN_TO_BE_REPLACED