Consolidation without a loan
Debt Management Plans
Learn about the nonprofit debt relief option that can help save time and money on your credit card debts.
END_OF_DOCUMENT_TOKEN_TO_BE_REPLACED

Featured Service
Foreclosure Counseling
Housing concerns are on the rise. If you need help, our HUD-certified counselors are here for you.
END_OF_DOCUMENT_TOKEN_TO_BE_REPLACED

Featured Blog Post
Do I Have to Pay Taxes on Unemployment Benefits?
Here's everything you need to know about who charges tax on unemployment benefits and how much it may cost you.
END_OF_DOCUMENT_TOKEN_TO_BE_REPLACED

How Credit Card Debt Gets Split Up in a Divorce 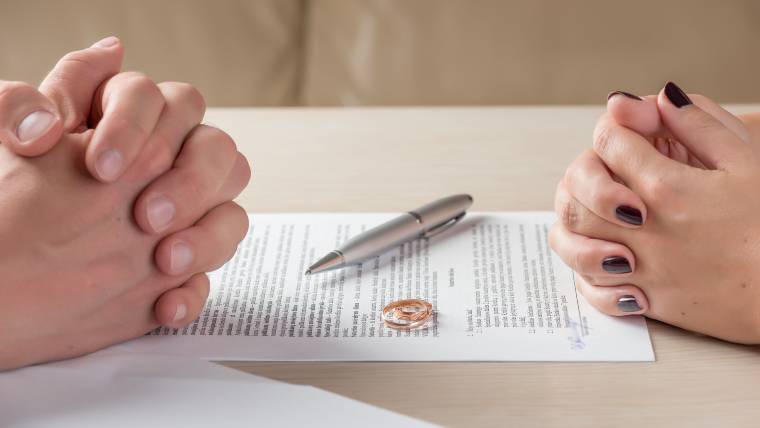 The following is being provided for informational purposes only and is not intended as legal advice.

Divorce is an unpleasant process, even if the outcome is in everyone’s best interests. Part of the unpleasantness comes from splitting a single household into two. Over the course of a marriage, you collect a good many things together – including debt. And since debt happens to be one of the few things you’ll fight to not keep, you may be wondering exactly what happens to your debt when you get divorced.

Debts are usually divided through negotiation

Divorce often involves a lengthy period of negotiation, where both sides try to divide assets and responsibilities in a mutually acceptable manner. In the event there are issues that the two parties cannot resolve through negotiation, the matter may go to trial, in which case a judge will provide an order of dissolution determining how everything is divided.

If everything is settled during negotiations, then the fate of your debts will be decided there. You may choose to split everything evenly, or one party may take on a greater share of the debt in exchange for a larger share of the assets (such as the house).

If you end up going to court, the judge will weigh all available factors before deciding what happens with your debts.

A divorce agreement doesn't make your legal responsibility go away

In most states, it’s generally presumed that if a debt is in your name, it’s your responsibility. This becomes a little muddy in the small handful of “community property” states. In these states, debts incurred during a marriage (but not before or after) are generally viewed as being community debts, with both spouses sharing equal liability in the eyes of the law. Exceptions are made, however, and you could argue that a particular debt did not benefit the household, but instead only benefited one spouse.

And it's important to know who is legally responsible for a debt, because the arrangements that you make during divorce negotiations don't supersede whatever laws govern the debts in question, which matters if one party stops making their agreed upon debt payments.

That may sound a little harsh, but the truth is that no matter what decisions are made between you, your former spouse, your divorce attorneys, and the judge, you already have an agreement in place with your creditors and they intend to hold you to that agreement.

This is very important to keep in mind. If your name is on an account (and not merely as an authorized user), the creditor will hold you responsible for the debt. If your former spouse agrees (or is required) to repay a debt and doesn’t, your credit can be damaged and the creditor can begin collection activities against you. And if your former spouse files for bankruptcy, the responsibility may shift to you (presuming you have some legal liability for the debt).

Thankfully, while your creditors may not care about what’s stated in your order of dissolution, the court does, and you can potentially sue your former spouse for damages if they fail to repay those debts as agreed upon.

You can minimize pain by being proactive

No matter how cordial and civil both parties may be, divorce can be painful. Of all the things you’ll be working through together, credit card debt will probably be a lower priority, but there are definitely ways you can make that part of the process less difficult.

Split up your accounts quickly, cleanly, and thoroughly. If a spouse is an authorized user on your account, have them removed. If you have any joint accounts, decide who will keep the account and contact the applicable creditor to have the second party removed. If you can’t decide who keeps the account, close it and open a new account in your name.

Pay off or transfer debts ahead of the divorce if possible. The act of splitting up debts can be messy and, as noted, even if your order of dissolution says you aren’t responsible for a debt, your creditor may disagree, and you can suffer if your ex-spouse fails to make their payments. You may be able to sue your former spouse for damages in that scenario, but it would much easier for all parties involved if those unsecured debts were simply paid in full ahead of time.

If you don’t have the ability to clear those debts before the divorce, it’s a good idea to instead transfer them to accounts controlled solely by whichever party the court has ordered to repay the debt. This way if your spouse doesn’t make their debt payments, they’ll be the only one to suffer.

Dealing with a broken budget and overwhelming debt as a result of a divorce or separation? MMI offers free financial counseling and debt repayment assistance, 24/7. Get the relief you deserve.

Consolidation without a loan? See how a debt management plan can help improve your debt situation.
END_OF_DOCUMENT_TOKEN_TO_BE_REPLACED